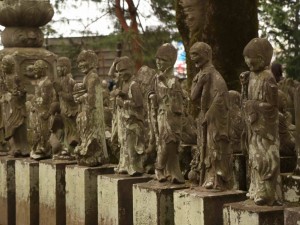 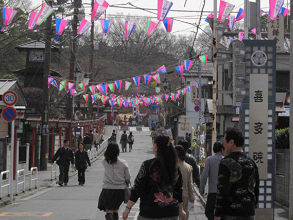 Why don't you visit historic sites dotting the city and enjoy the beautiful townscape, with a well-informed tour guide in this area?
"Kawagoe", an old castle town, nicknamed "Little Edo (the former name of Tokyo)". During the Edo Period, Kawagoe prospered as a supplier of commodities to Tokyo. As Kawagoe was an important city to the capital for trade and strategic purposes, the shogun installed some of their most loyal men as lords of Kawagoe Castle. Close ties ensued between the two cities and over the years, Kawagoe inherited many aspects of the Edo culture and architecture.

Kitain Temple: Over 1,200 years old and played a major role during the rule of the Tokugawa shogunate. It s the head temple of the Tendai Sect in the Kanto Region.
Kawagoe City Museum: It houses exhibits from the ancient times to modern times. Through excavated relics, preserved artifacts, models and actual-sized replicas, visitors can travel through time and learn about the changes in the city.
The ruins of Kawagoe Castle (Honmarugoten): Meaning "the palace in the inner-most circle of defense", is the only surviving building of the former Kawagoe Castle. It used to serve as the lord's residence and offices.
Hikawa Shrine: This shrine is said to be approximately 1500 years old and cherished by Kawagoe natives and called "Ohikawasama." With two sets of deities that are regarded as married couples, the shrine has been historically worshiped for "matrimonial happiness", "happiness in the family" and the "deity of matchmaking".
Bell Tower (Tokino Kane): Originally built in the early 1600’s, though has been rebuilt several times since then due to damage from fire. The tower is three stories tall (16 meters in height), and its beautiful chimes currently ring out four times a day.
Candy Alley (Kashiyayokocho): Lined by stores selling traditional Japanese sweets and cakes, which gave the alley its name. Among the treats sold are various candies, rice crackers, karinto (sugar coated, deep fried cookies), ice cream, and cakes made of red bean paste and sweet potatoes.
Kawagoe Festival Museum: Materials on the Kawagoe Festival are on display, including floats actually used in the festival.